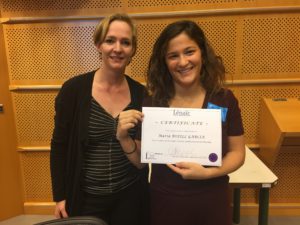 My experience as the first recipient of the Lénaïc Fund for Journalism has come to an end and I have only positive things to say about these months. I perfectly remember the moment when I was told I had been selected. I felt a little bit scared at first because of the big responsability that came with being the first recipient of such a special and important fellowship. But that uncertainty just disappeared when I talked with David Thual and John Clancy, the founding members of the Lénaïc Foundation, as well as with Aulde and Charles, Lénaïc’s parents. Their human closeness and the hope placed in the project reassured me. I realised that I would not have any problem and that I could count on them for everything I needed. And that was indeed the case.

Now I realise how lucky I have been for having the opportunity to enjoy such an experience. I have been working together with great professionals of Brussel’s journalism and I have had the chance to learn much more than I had imagined.

When I started working at MLex, a news agency specialized on antitrust and regulatory risk, I knew it would not be easy. I had to work in a different language on very specific topics which were totally unknown to me. At the beginning, it was hard for me to understand how the media worked, getting used to the specific vocabulary, style, etc. But I had the great luck to work with approachable and qualified people, who were always willing to help me and resolve any doubt I could have.

In just a few weeks I was already feeling very comfortable. I started to learn about new topics like energy, competition or Brexit, and I discovered a huge world of journalistic opportunities that I had never considered. During these months, I had the chance to attend many events about energy, financial services, technology, etc. and I could get to know first-hand how EU journalism works. I visited the European institutions at different times, and met leading figures at the European level, such as Margaritis Schinas, the European Commission’s spokesperson.

A key event for me was the EU leaders’ meetings at the EU Council. I attended two Summits of EU leaders in Brussels, which is a unique opportunity for any young journalist. It was great seeing how journalists work in real time while the leaders take some of the most important decisions for the future of the European Union and its citizens. Besides all of that, I met and talked to some of the most important correspondents in Brussels, getting to learn about their experiences and the work they do.

This experience in general, has made me realise that I actually want to work as a journalist and that Brussels is one of the best places in Europe to start my professional career.
Nowadays, journalism faces several challenges which require dedication, effort and professionalism from all journalists who are willing to make quality journalistic work. That is why it has been so important for me to have the chance to work in a newsroom like the MLex one, where I have been able to see and understand the effort and sacrifice behind proper journalism.

The European Union is not going through its best moment either. The Euroscepticism continues to grow in some member states of the European Union and Brexit talks are proving very difficult. That is why it has been so interesting to be in Brussels in such a decisive time, when there are so many things going on every day and while the European model is being rethought.

Working as a journalist in Brussels I learnt how to see the world from very different approaches. I have met journalists from all over the world and political colours, who made me aware of the fact that there are always different points of view for the same fact. I have opened my mind and I have grown up as a professional and as a person. Besides that, I have been able to learn new aspects of journalism, and I have considered new options for my future that I had never thought about.

That is why everything I take from this experience is positive and I will never stop saying thanks to the Lenaïc Fund for Quality Journalism for everything it has given me. Since the very first moment I knew it would be an incredible opportunity, but, as many times in life, the reality was actually better than the expectations.

Now, I can just say thank you once again for this great experience and wish the best of luck to the new fellow, hoping that the experience is as wonderful for her as it has been for me.

I am already in the middle of my internship. It’s been around two months and a half since I first started, and I can say it’s being such a positive experience. I keep learning everyday and that world that two months ago seemed so strange and unknown for me is now beginning to be familiar.

This is a crucial moment for the future of the European Union, full of key events: the activation by the UK of the article 50 to start the Brexit process, the controversial French elections, the constant threat of populism and extremes over Europe, etc. It is probably one of the most convulsed moments that the EU has ever experienced, but no doubt, it is also one of the most interesting for a journalist in Brussels. That is why I feel so lucky to be here, witnessing firsthand such a relevant era, full of changes that will define the future.

The last month and a half has been marked by the Brexit and the activation of the article 50 by the British Prime Minister Theresa May. It’s been crucial weeks on this process and being able to follow it up so closely it’s been really enlightening for me. Last April 29th I could attend the extraordinary Council meeting of the EU 27 heads of state and presidents of government to adopt the guidelines for Brexit negotiations.

Journalists from all over the world at the Council’s tables, covering every single move of the EU leaders in real time. Press briefings of the presidents. Working around the clock, with that immediacy which characterises journalists. Being able to experience firsthand all of that was a great privilege for me, and I expect to have more opportunities like that one to follow so closely this kind of events.

Besides the Council, I have covered other topics and cases which have been totally rewarding for me. Energy, IT, financial services… Issues that I had never worked on and have showed me a great range of possibilities beyond political journalism, which is my specialization. And the best part is I have found out that I really like those possibilities and are so much more interesting than I expected only two months ago.

I keep learning and enjoying the experience as much as I can. I have already spent half of my time in MLex, but I am sure the best part is yet to come.

When I got the email to inform me I had been selected as the first successful candidate of the Lénaïc Foundation I didn´t really know how to react. I read the email again and again, trying to assimilate that what I was reading was actually true.

Seconds later the shock became excitement and I called my family and friends to share my joy with them. Then the questions came. “Am I going to be able to rise to the occasion?”, “Will I be able to do what is expected from me?”. I felt a huge responsibility of being the first beneficiary of the Foundation’s fellowship, but at the same time I knew it was going to be a unique and special experience. If motivation and enthusiasm was everything I needed, then I had a lot of that.

Now, it´s already been four weeks since I started the fellowship working at Mlex in Brussels. I surely can say I was not wrong when I thought it was going to be one of the most enriching experiences of my life. It has been a month of adaptation. I have been focusing on trying to understand the dynamics of the media and the kind of stories they cover. The topics they follow are mostly really new and specific for me. If I add the fact that the working language is not my mother tongue, the difficulty is even greater. But that is how people grow in a professional way, trying to overcome obstacles and learning from experienced and talented people who are willing to teach. Everyone at Mlex has been like that since the very first day, and they have made the process of adaptation so much easier for me.

The fellowship of the Lénaïc’s Foundation gives me unique social and networking opportunities. In just one month, I have already had the chance to meet great people, in particular Lénaïc’s parents and friends. I also had a fun evening at the Brussels Annual Press Revue, an event organized by journalists where the EU media and some European officials host comedy sketches. The performers last year kindly donated a large part of their takings from the show to the Lénaïc Fund. I had a great time and got to meet many actors and commentators of the EU bubble. Thanks to the Foundation, I also have a chance to meet with leading figures at the European level who are happy to help fellowship recipients. A few weeks ago, I met with Margaritis Schinas, the European Commission spokesperson who was kind enough to brief me on his work and on the EU media work here.

I am very busy but also a very happy and proud person at the moment!